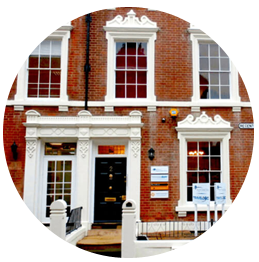 The Nottingham clinic is located in the city centre, just a short five-minute walk from the market square and ten minutes from the train station, in the grounds of the Park Estate, the former deer park of Nottingham Castle.

From the train station, head towards Maid Marian Way in the direction of Derby Road and the Holiday Inn Express island. Just before the top of Maid Marian Way (at the casino), take the first left to Park Row, signposted towards the castle.

2 Regent Street stands proudly as the corner property between Park Row and the second road on the right (Regent Street), opposite the large NCP car park on Mount Street. There is metered parking along the whole of Regent Street and the surrounding streets.

The Nottingham Clinic is the flagship centre for Regent Street Clinic™, the iconic original centre which was one of the first private primary care medical clinics in the UK at its inception in 1998.

The building has been a private medical establishment for over 140 years, stretching back before the days of a nationalised health service, to the days of the Nottingham General Hospital, the remnants of which are still visible a few yards away.

The clinic is a stone’s throw away from Nottingham castle and the statue of Robin Hood, famous landmarks in central Nottingham, in the very heart of the professional quarters and near the Ropewalk.

An imposing Grade II listed Victorian property, it houses our central call centre and is manned by up to 15 members of staff at any one time. It is a hub for primary and secondary private medical care in Nottingham, where over a quarter of a million people have been seen, treated, managed, referred and cared for since May 1998.

Parking is metered immediately outside the premises, and there is an NCP car park immediately adjacent to the clinic, across the road on Mount Street.

Our clients attend the clinic from all parts of Nottinghamshire and beyond, including West Bridgford, Long Eaton, Beeston, Mansfield, Sutton-In-Ashfield, Ravenshead, Bingham, Ruddington and further afield. The clinic sees national and international students from both Nottingham University and Nottingham Trent University.

The Nottingham clinic is open every weekday with early morning and late-night appointments being particularly popular.

The clinic also benefits from in-house counselling and psychotherapy services.

Choose your preferred day with our expert doctors

Regent Street Clinic has clinics
throughout the UK