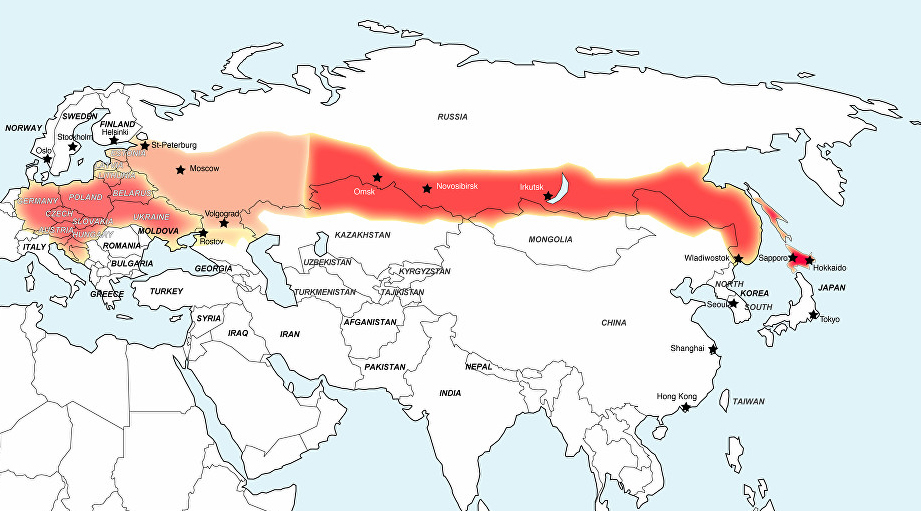 Over the past decades, tick-borne encephalitis (TBE) has become a growing public health concern in Europe and Asia and is the most important viral tick-borne disease in Europe.

The countries with areas most affected by TBE are:

TBE is endemic across much of Central and Eastern Europe and the incidence is increasing, with numbers estimated to be as many as 10,000 cases per year.

The Far Eastern type is endemic in areas of China and Japan.

In endemic areas, people with recreational or occupational exposure to rural or outdoor settings are potentially at risk:

The incubation period of TBE can be from 2 to 28 days (usually between 7 and 14 days) and is asymptomatic, which means that you wouldn’t know that you had the disease.

A characteristic biphasic febrile illness follows, with an initial phase that lasts 2 to 4 days – the viraemic phase.

It is nonspecific with symptoms that may include:

TBE cases occur during the highest period of tick activity, ie between April and November.

Sometimes in warmer southern areas, this period may be extended.

Person-to-person transmission has not been reported.

There is no specific drug therapy for tick encephalitis, but there is a very effective vaccine.

If bitten by a tick, medical advice should be sought locally, as specific treatment may be available and advised within 48 hours.

Meningitis, encephalitis or meningoencephalitis require hospital supportive care based on syndrome severity and all these conditions are potentially fatal..

Anti-inflammatory drugs,may be considered under specific circumstances, for symptomatic relief.

Long-lasting or permanent neuropsychiatric complications can occur in around 10-20% of patients, following the European form. Complications are usually more severe and can be more frequent in the Far Eastern form.

In general, mortality is around 1% for the European form and 5-20% for the Far Eastern version, with deaths occurring 5 to 7 days after the onset of neurological signs.

People aged over 60 years are most at risk of death.

TBE can be prevented by using insect repellents and protective clothing to prevent tick bites. Unpasteurised milk should not be drunk in areas at risk. Those in tick areas should check their skin for attached ticks, which is easier to do with a partner. However, early removal of ticks does not prevent disease. Ticks should be removed as soon as possible with tweezers. Up to 10% of ticks may be infected.

Effective inactivated vaccines are available in the UK for the protection of those individuals at high risk of exposure to the virus, through travel or employment.

There is only one licensed vaccine available in the UK.

Vaccination is recommended for:

Those travelling to warm, forested parts of the endemic areas, particularly in the spring and summer, where ticks are most prevalent.

Those who will be going to reside in an area where TBE is endemic or epidemic, particularly those working in forestry, woodcutting, farming and the military.

Ideally, immunisation should be completed at least a month before travel. It is considered to be effective against all strains of the disease.
It should not be given to those who are allergic to eggs.

For rapid short-term protection of children and adults, the second dose may be given two weeks after the first dose and gives at least 90% protection.

This is useful for last-minute travellers requiring cover quickly, as seen in our travel clinics.

A booster dose should be given every three years if there is a continued risk.

Following a successful nationwide vaccination campaign in Austria, the annual number of TBE cases fell to about 10% of those reported in the pre-vaccination era.

The vaccine efficacy rate is around 99%.